After weeks of research, and then days of cultivating a Farnell
shopping basket, I finally handed over some cash for the first parts
for my quadcopter. Lots of nuts and bolts, cable ties, spacers and
other misc. Plus Amazon and Ebay purchases too: heat shrink stuff,
connectors, various tools and nice new variable power soldering iron
to replace my (admittedly very trusty) 25W Weller.

The frame stuff was in excess of the cost of a off-the-shelf
quadcopter frame kit, which did make me almost reconsider building my
own. A kit obviously gives you all the parts for one frame, and I have
enough parts here to rebuild my own frame 10 times over, for around
the same cost (though I’ve still to buy the aluminium, but that’s
quite cheap). From what I’ve read, frame breakage is to be expected,
especially if you’ve not flown anything before, so the idea is this
will pay for itself. It’s also going to be way more fun, and I’ve
already learned loads of new things about lots of diverse subjects!

I also ordered an Ardupilot APM 2.5+ flight controller, with the gps
addon. I went without the telemetry module for now – looking to
integrate it with my (to be chosen) transmitter’s built-in telemetry
display.

I’ve yet to choose transmitter, motors, escs, props or battery.

Plan is to get this flying and learn how to fly it before starting
down the first-person-view video setup.

I’ll try to keep up with blogging about it and file them all together here in the Quadcopter category. 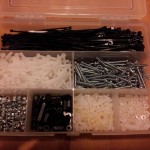 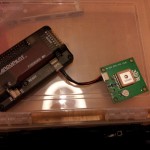