So, a BNP election candidate has been accused of possessing the largest amount of chemical explosives of its type ever found in Britain. The government held a press conference. I read it on the BBC.

The guy was charged under the Explosives Substances Act 1883 last Monday. Another guy has been charged with similar offences. Yeah, I read it in the Guardian.

It has been reported that police discovered a rocket launcher, a nuclear biological suit, chemicals and BNP literature. It was right there in the Independent.

Just back from the Labour Party conference protest in Manchester. I’ve uploaded a few of the best photos but not had time for any fancy post-production. Consider these released into the public domain. 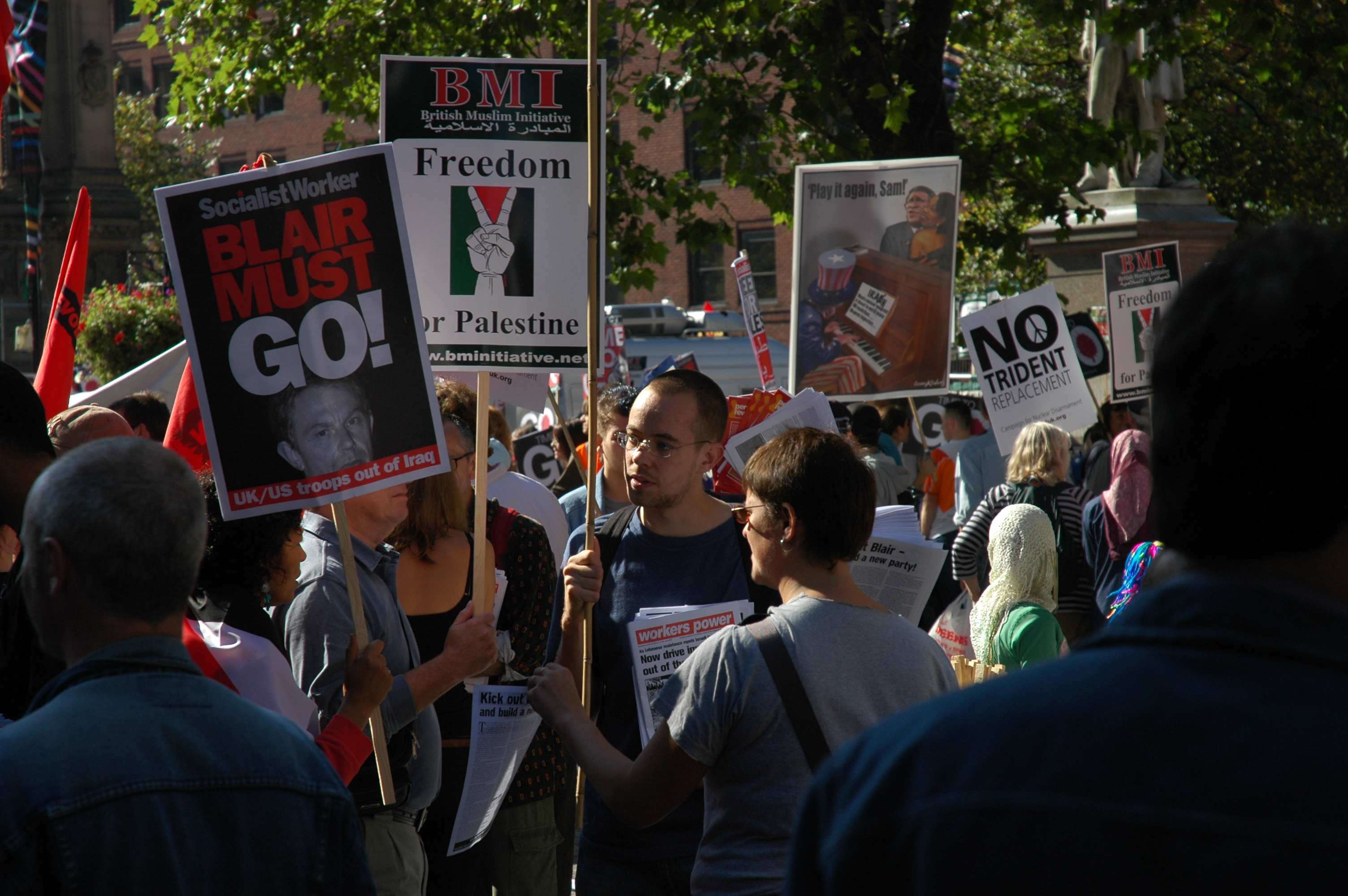 The latest News Sniffer project went live today: Revisionista. It tracks changes in corporate news articles and marks the differences. So you can choose a BBC news article and see how it’s changed since it was first created. Most changes are on breaking new articles which get updated as more information becomes available, but some changes are rather telling of policy.

Currently only the BBC is monitored, but it’s pretty easy for me to add support for any site with an RSS feed.

BBC Have Your Say

A while back I wrote a system to detect when the BBC censor comments on their Have Your Say website. It’s been running for a few months now and recently I wrote a fancy front end for it to allow easy browsing of the database.

It’s called ‘Watch Your Mouth’ and it’s part of my News Sniffer project, which will include other corporate media monitoring tools (coming soon).

I spotted some BBC ip addresses browsing the site already too.

At the end of these… Why won’t the British and American governments support the end of this violence? Why is America rushing to continue it’s arms supply to Israel? Why is the British government allowing the transport of these weapons through our country? In the face of mounting evidence, why don’t the corporate media challenge the claims that our governments support peace? Why do we let all of this happen? Do we not care? What is wrong with us?

“Israel has been pursuing a campaign in Gaza for almost three weeks, since Cpl Gilad Shalit was captured by militants on 25 June.”

“Gaza, itself, the latest phase, began on June 24. It was when Israel abducted two Gaza civilians, a doctor and his brother. We don’t know their names. You don’t know the names of victims.”

“Nor have the press suggested that the one-sided nature of the killing in the weeks leading up to the capture of the Israeli soldier might have “sparked” Palestinian actions.

On June 8, the Israeli army assassinated the recently appointed Palestinian head of the security forces of the Interior Ministry, Jamal Abu Samhadana, and three others. On June 9, Israeli shells killed seven members of the same family picnicking on Beit Lahiya beach. Some 32 others were wounded, including 13 children.

–David Edwards in a Medialens alert

I’ll get us started: BBC news do mention the capture (it’s only kidnapping when official enemies do it) of the two Gaza civilians in this article, which I had to dig around to find. I’ve not seen it mentioned being possibly related to the capture of the Israeli solders the next day.

This article on the Guardian website is amusing. They tell the tale of Al Gore’s new Documentary about global warming, named An Inconvenient Truth.

The Guardian, as most mainstream media, make the vast majority of their income from advertising. And the majority of advertising revenue comes from the automotive industry. So, obviously, the Guardian cannot afford to discourage automotive advertising in its newspaper and on its website by taking global warming seriously.

The article reduces the film to “wooden vice-president and failed presidential candidate, wheeling his suitcases from town to town and presenting a slideshow about climate change”. It goes on to suggest that it’s only popular because it was produced by the same guy as Pulp Fiction (huh?).
END_OF_DOCUMENT_TOKEN_TO_BE_REPLACED

Chávez is a threat

Chávez is a threat because he offers the alternative of a decent society.

Fact-deprived attacks on Chávez in the Times and the Financial Times this week, each with that peculiar malice reserved for true dissenters from Thatcher’s and Blair’s one true way, follow a travesty of journalism on Channel 4 News last month, which effectively accused the Venezuelan president of plotting to make nuclear weapons with Iran, an absurd fantasy.

In contrast, Tony Blair, a patrician with no equivalent democratic record, having been elected by a fifth of those eligible to vote and having caused the violent death of tens of thousands of Iraqis, is allowed to continue spinning his truly absurd political survival tale.

The BBC has done a pitiful job of covering the court martial of RAF doctor Flt Lt Malcolm Kendall-Smith who defied orders to return to Iraq citing the illegality of the war.

The prosecution said “it was not Dr Kendall-Smith’s responsibility to question the legality of orders given to him”.

Well, actually, it is. In fact, by law, not only is he to question the legality, he is to question to morality of orders too. As was established before the Nuremberg trials, a soldier cannot use “just following orders” as a defense against criminal prosecution. The London Nuremberg Charter explicitly stated that. The US Uniform Code of Military Justice was ammended after World War II to reflect it. This was all part of the reformation of International law.

I didn’t happen to notice any of this relevant information in the BBC article. I guess they had diverted journalistic resources to covering the all-important Da Vinci Code trial.

George Bush’s No 2, Condoleezza Rice, is coming to En-ger-land. She’s not leading an invasion (ha!), she was invited by Jack Straw. During her time here she’ll be visiting Liverpool and Blackburn. Get yourself down to the organised protests on Friday 31st March in Liverpool and Saturday 1st April in Blackburn. Read more at www.condiwatch.co.uk.

UPDATE: I took some photos on Friday night at the Royal Philharmonic in Liverpool. I hearby throw this set of photos into the public domain. Do with them as you wish. 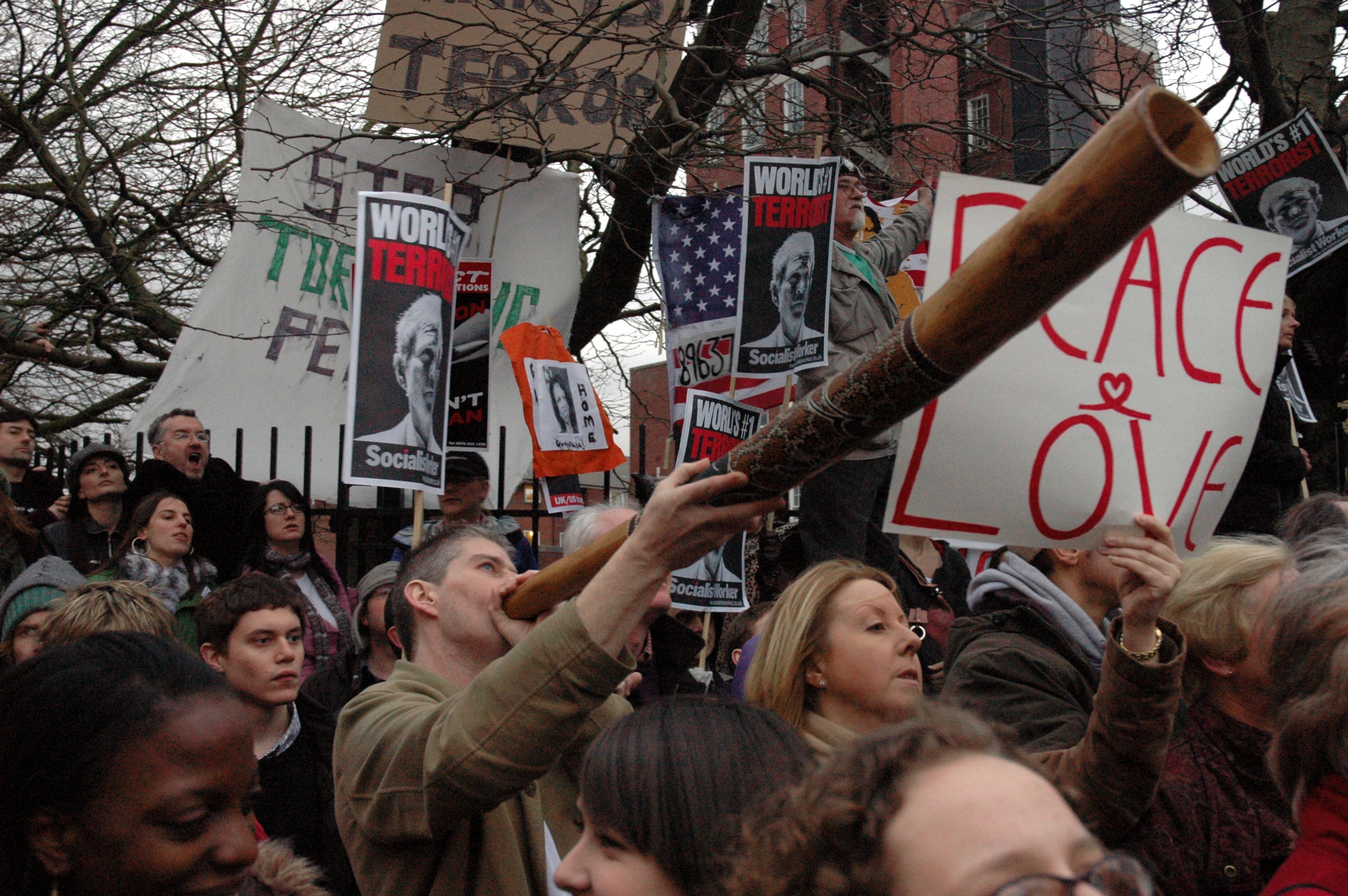 ANOTHER UPDATE: Fixed the link to the rest of the photos. Duh

The “liberal” “left-wing” media are, once again, falling into line to support another war to enforce the status-quo (along with all the “right-wing” media too, but that’s rather a given). Iran is 10 years away from creating even one nuclear weapon (assuming that’s what it’s trying to do) yet the mainstream media are telling us they are a major threat.

This is how it always works. When the powers that be announce a new threat (Iran) the mainstream media fall over themselves to support it without question.
END_OF_DOCUMENT_TOKEN_TO_BE_REPLACED

“We are extremely concerned at the ongoing culture of secrecy endemic in the planning of the identity cards proposals. The Home Ofﬁce has conducted most of its work in a covert fashion, refusing to disclose information that would inform debate, and conducting negotiations in a closed environment. This process is inimical to the creation of trust. This situation also makes further research on the proposals impossible.”

The last report was immediately damned by the Government at every turn in what can only be described as behaviour of the intensely insecure. Why are the Government so insecure about the details of their Bill?